Have you ever noticed that your fireplace smells—as in, it smells bad. Really bad! Or maybe it just kind of smells, but the smell is distinctive enough that it has you worried. You noticed it because you haven’t had reason to build a fire yet this winter, but now the occasion is finally here. When you got down on your knees and leaned into the fireplace, you couldn’t deny that there was something that didn’t quite sit right with your nostrils.

Should you be concerned?

In short, yes, you should give this problem the attention it deserves. However, this is not the end of the world. There are any number of reasons why your fireplace and chimney might smell bad, and although some of them might be less savory than others, none of the reasons for a smelly fireplace puts you in immediate danger.

First and foremost, don’t try to mask the problem with an aerosol air freshener. Although spraying the room down with the scent of artificial lemon or pine might make the room smell better in the short term, it doesn’t address the actual problem of what’s going on with your chimney.

However, even if you solve the problem of the chimney draft, you still have the source of the bad smell to address. Depending on what’s causing the smell, you have several options:

When you burn wood in your fireplace, that burning wood gives off a byproduct known as creosote. It’s thick and black when it’s in the smoke coming off the burning wood. When it settles on the inner walls of your chimney, it quickly becomes a hard, resin-like material that can block the flow of air in your chimney. Creosote can put off a strong odor of its own; additionally, it can get other gross debris stuck in its crevices and cause other problems. This is one of many reasons you want to keep creosote out of your chimney by having a regular sweeping. (It’s also worth noting that creosote is a fire hazard, so even if you don’t have it cleaned out for the smell, you should have it cleaned out to avoid a potential fire.)

Unfortunately, humid air from summer (especially if you’ve had a lot of heavy rain) can cause a moisture buildup inside your chimney. When there’s plenty of smoke passing through your chimney, there’s too much warmth and dryness for moisture to really accumulate. But if your fireplace has sat dormant for a long period of time, that moisture in your chimney could lead to mold or mildew, which will cause a musty smell.

Is it a dead animal?

Although this isn’t something many people want to think about, it is a reality: Some animals find their way into your chimney to escape the cold or other natural elements like rain and snow. They could either find themselves stuck or they make themselves comfortable and end up nesting in your chimney. If an animal winds up dying in your chimney, you’ll soon notice the disturbing smell. This smell of a dead animal can end up becoming even worse if you light a fire and the heat and smoke do further damage to its remains. You’ll need to call a certified chimney sweep to remove the animal from your chimney, along with its nest if there is one.

This one isn’t nearly so gross as a dead animal, but it does mean rot and decomposition happening inside your chimney. When too many leaves are blown down your chimney and get stuck down there among the creosote, they can start to break down. This breakdown of plant-based matter has a strong, earthy smell to it, which, like a decomposing animal, will be exacerbated if you try to light a fire underneath of it.

It’s important to remember that no matter what is causing your fireplace to smell bad, you want to have a professional take care of the problem. Our certified team is standing by, ready to assist you with all your chimney needs. Reach out to us today by calling 410-796-8450. 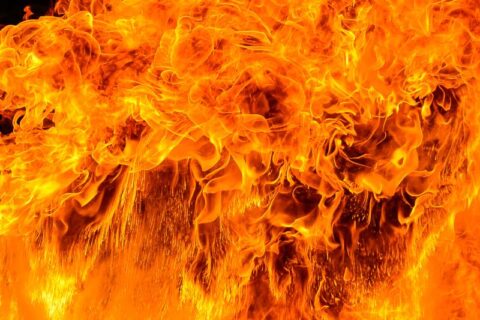 Chimney fires are scary. If you read the articles about Rachel Ray’s chimney fire and how quickly it spread through her home, you are probably… 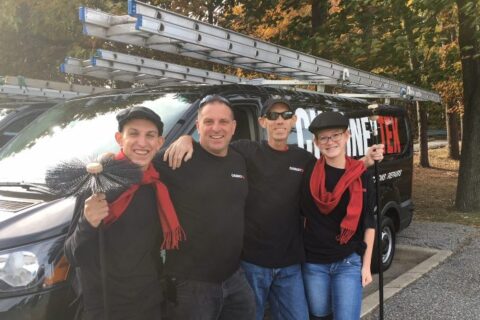 As most people know, chimney cleaning and inspection are an important part of maintaining a safe and functional fireplace. However, many people put…